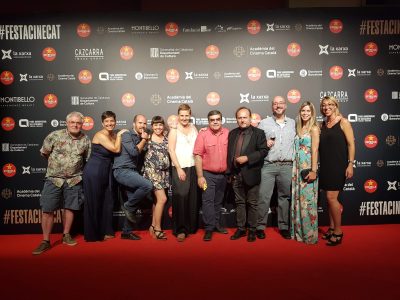 The Catalan Film Academy (ACC) has chosen Terrassa this year to take the appointment of 6 new members and to celebrate its already traditional Summer Festival. La Casa Alegre de Sagrera and the Parc Audiovisual have been, respectively, unbeatable scenarios for hosting the events. More than 400 attendees filled the gardens of the Parc, geared for the occasion: actors, producers, directors and personalities of the sector in general, among them, Carlos Marqués-Marcet, Neus Ballús, Marc Recha, David Verdaguer, Maria Fernández Soto , Sílvia Quer, Aina Clotet, Elena Martín, Vicky Luengo or Cristina Brondo.

The act of appointment of the new members was presented by the actress Elisenda Pineda in the gardens of one of the modernist icons of the city, the Casa Alegre, and was attended by the Mayor of Terrassa Mr. Jordi Ballart, and the Councilor for Culture and actress Maria Rosa Boladeras, received by the president of the Catalan Film Academy, Isona Passola. Also attended by Núria Lomas and Òscar Pascual, manager and coordinator respectively of the Department of Culture, Education and Sports of the Diputació de Barcelona; Iolanda Batallé, director of the Institut Ramon Llull; Francisco Vargas, director of the Audiovisual Area of the Catalan Institute of Cultural Enterprises; Mònica Arús, Manager of the Resources Department of the Catalan Institute of Cultural Companies and Àlex Casanovas, President of the Association of Professional Actors and Directors of Catalonia.

The distinguished ones have been: the actresses Assumpta Serna and Carme Elias; the exhibitor Pere Sallent; the actor, director, essayist and cultural manager Hermann Bonnín; the filmmaker Jordi Cadena; and the maker Elena Jaumandreu.

The eleventh Summer Festival of Catalan Cinema in the gardens of the Parc, a unique place full of cinema, has been the meeting point of the sector in a pleasant summer night where music rang until midnight